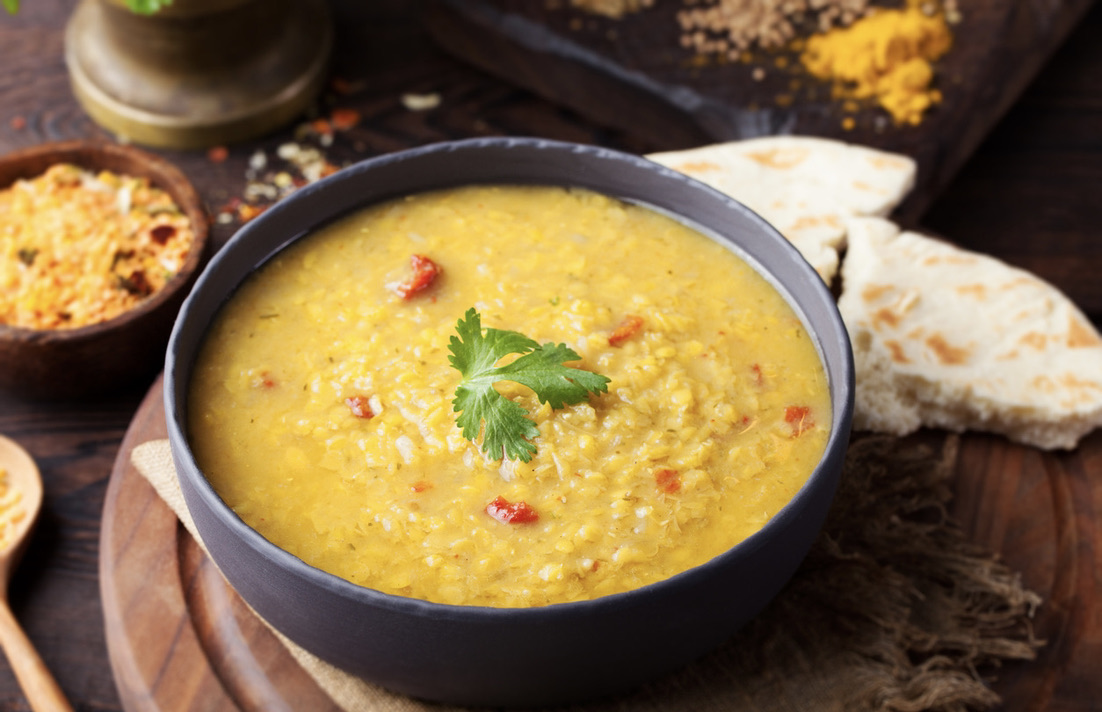 One Day at a Time

Priya didn’t remember learning how to cook. It came as naturally as learning to walk. When she was a little girl growing up in Guyana, she watched, mesmerized, as her mother prepared dinner.

She fell in love with the gold sheen of curry as it stewed in the pot, the way rotis inflated like balloons when placed over the fire, the lilt of her mother’s voice as she sang ‘One Day at a Time Sweet Jesus’ as she stirred the dal, even though she was Hindu. Everything seemed like magic to Priya, but unlike magic, cooking didn’t get boring once she knew all the tricks.

Soon, Priya was slicing potatoes for aloo curry, kneading the dough for the roti, stirring the dal while mumbling melodies from Bollywood movies instead of carrying on with her mother’s old tune, and for once in her life, no one questioned her. There was freedom in cooking, so long as basic rules were observed. She had to cook the potatoes a certain way and stir the dal to keep it from settling, but so long as the food tasted good in the end, Priya was free to use as many cloves of garlic as she liked and sing whatever song she wanted.

By the time she was fourteen, Priya had become a better cook than her mother, or so her father told her when her mother was out of earshot. He devoured whatever Priya put in front of him with such enthusiasm that, to a stranger, it might have appeared that he hadn’t eaten in weeks. When he finished, he picked up the plate and licked it clean, and it always made her laugh, no matter how many times he did it. He died of a heart attack in his sleep a week before Priya’s fifteenth birthday. His last meal was her first attempt at shrimp curry.

While her mother took care of the funeral arrangements, Priya prepared food for the guests. She made each dish the way her father would have liked it. They gave him a proper Hindu funeral and cremated him on a funeral pyre slathered with ghee.

Priya and her mother immigrated to Canada a year after her father’s passing. Priya’s Auntie Devi—her mother’s sister—owned a Caribbean grocery store in Toronto, and she sponsored them. They arrived in the winter; they came out of the airport and found themselves in the middle of a blizzard. The falling snow reminded Priya of her father’s ashes.

Priya didn’t get to savor her new surroundings for long. The responsibilities of a new school and a new job were soon thrust upon her. On weekdays, Priya, already exhausted from school, worked at the store until closing time. She was there all day on weekends, helping customers, stocking shelves and sweeping the floors. When all was said and done, she was too tired to study. She dropped out during her senior year and dedicated herself to the store, despite her mother’s protests. It didn’t bother Priya; she was too busy to keep up with her studies, and she couldn’t afford college anyway.

When Priya wasn’t working, she was cooking. Meat was easier to come by in Toronto, and she spent countless hours currying chicken, goat, shrimp, and hassar. She shared her creations with her mother and aunt, and when they sat down to eat, the two older women told Priya how much her food reminded them of home.

Priya didn’t miss Guyana; she never got the chance. Even though she was a thousand miles away, the rules and expectations of her culture extended beyond the things she cooked. It was the reason she ended up with a man she didn’t love.

He was a regular customer at the store, Guyanese just like her. She didn’t think much of him, but he was a cardiologist and made good money, and upon constant pressure from her mother, she humored him. She was twenty years old when they got married. He was thirty-five.

Priya moved out of the apartment above the store and into a big house in the suburbs, and although she held no affection for her husband, she adored the three children they had together. Andrew, Bobby, and Sarah. She insisted on white-sounding names so they wouldn’t be bullied. It wasn’t enough; Andrew came home crying on his first day of elementary school. When Priya asked what was wrong, he told her the other kids had made fun of the curry she’d packed for his lunch and said it looked like diarrhea. From that day forward, she packed nothing but sandwiches for lunch.

Years passed, and Priya’s kids went off to college one by one until she and her husband were the only ones left in the house. With the kids gone, they no longer needed to pretend to get along. They both dreaded what their families would say if they divorced, so they decided to stay married and sleep in separate beds. Priya still cooked dinner for two, and they sat at the table every evening and ate together in silence.

After dinner, Priya washed the dishes and watched her husband through the kitchen window while he stood in the backyard and smoked. The cigarette dangled from his lips like a tusk, and his potbelly rose and fell as he exhaled, and it reminded her of the murti of Ganesha her parents kept in the house when she was a child. She used to place ripe mangos in front of the murti and prayed for health, wealth, and happiness. Two of her prayers had been answered; maybe the third was too much to ask for.

Alec Kissoondyal is an undergraduate at the University of Florida pursuing a bachelor’s degree in English. His work has also been published in Zephyr Literary Journal and Bacopa Literary Review. In his spare time, he enjoys nature walks, writing, and listening to Nick Cave & the Bad Seeds.