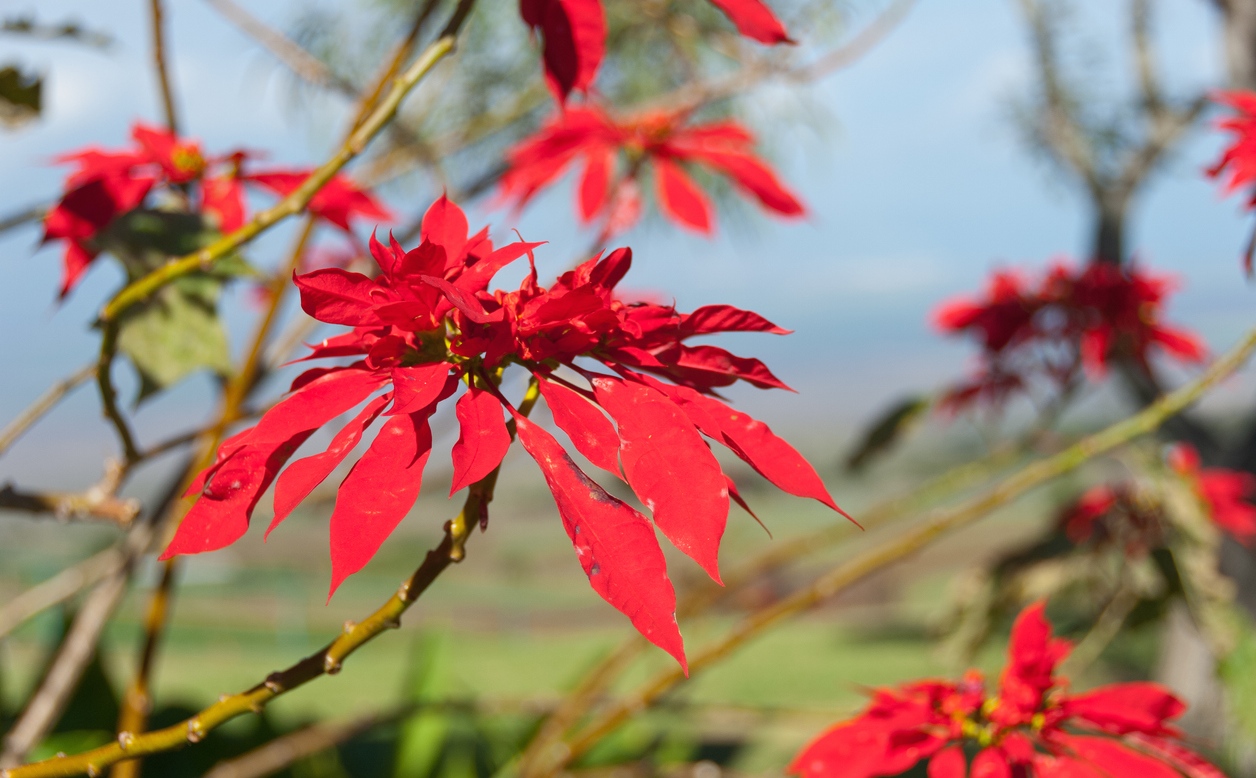 The flower was here before the white men came

In a town called Yextla, the flower grew in the ravines and next to the bushes in the glen. My tia Bertha lived in the house in front of the church, and in her garden was the tallest flower tree I had ever seen. When I would visit her, I played in her garden. I smelled the roses first. Then I went to the flower tree and hurt my neck looking up at the red leaves. Stood on my tiptoes to reach a blossom. Broke the stem of the one closest to me and brought the flower to my face to look at the yellow center. Pushed my nose at each leaf as I tried to smell it. I tried to smell what my people smelled when they would cut the blossoms to heal their bodies all those centuries ago.

Before the white men came, the Aztec people took the flower trees and planted them in the garden of the ruler Moctezuma. The garden’s soil was cold, and the flower had to acclimate to the change. The Aztec people called the flower cuetlaxochitl. In the Nahua language, cuetlahui means marchitar, or wither. Xochitl means flor, flower. Flor que se marchita. Flower that withers.

When the white men came, they found flower trees in the gardens of high Aztec officials. The white men liked the cuetlaxochitl so much they took it for their Christian festivities. The Franciscan evangelists used the flower to adorn their churches and Christ’s crib for the Nativity scene. This white men’s tradition gave the cuetlaxochitl its first white name. Flor de Nochebuena. Christmas Eve Flower. During the War of Independence, the white men gave orders to kill my people. First was Hidalgo, Allende, Aldama and Jimenez six months after September 1810. Shot to death, their heads cut from their bodies and placed in cages, a spectacle for the white men. In 1815, three days before Christmas, the priest Jose Maria Morelos y Pavon walked by the town Cuetlajuchil. He was taken prisoner to the adobe wall in Ecatepec, where he was shot to death. Cuetlajuchil was renamed Paso Morelos.

For eleven years, my people died so the white men could leave. But they stayed. Ambassador Joel Robert Poinsett visited the Santa Prisca church in Taxco in 1825, and in 1829, took the cuetlaxochitl flower to his home in Charleston, South Carolina. The flower gained splendid, glorious popularity in the US as it grew beside the magnolias in Poinsett’s garden. The white men renamed the cuetlaxochitl, again, calling it Poinsettia, after Poinsett who is remembered as the man who discovered cuetlaxochitl. I remember him as another white thief. Paul Ecke took the flower’s red hues, made them pink and white. And Robert Buist took the flower to Europe, and became wealthy through the flowers’ sales. Cuetlaxochitl lost its savageness. Now, the flower that once grew in the wild glens of a Mexican village is nothing but a sad domesticated potted holiday house plant that has no use when the petals wither. The flower is disposable for the white men. Like my people.

In my tia’s garden, I watched the white sticky sparkling goo of the broken leaf’s stem drip between my fingers. I spread the goo between my index finger and trace the leaf’s veins. Then I let the leaf fall on the warm soil and moved to the next leaf until all the leaves lie in the soil, my hands covered in white. And to the white men who had to take everything beautiful and make it theirs: I don’t forgive you, but a parent’s sin is not the child’s to carry.

Kenia Romero is a Mexican poet and writer. She currently lives in South Carolina’s Lowcountry. Her work has appeared in The Acentos Review and Adelaide Literary Magazine. A graduate of the South Carolina Governor’s School for the Arts and Humanities’ Creative Writing Department, she will be studying Psychology and Creative Writing at Warren Wilson College in Fall 2019.