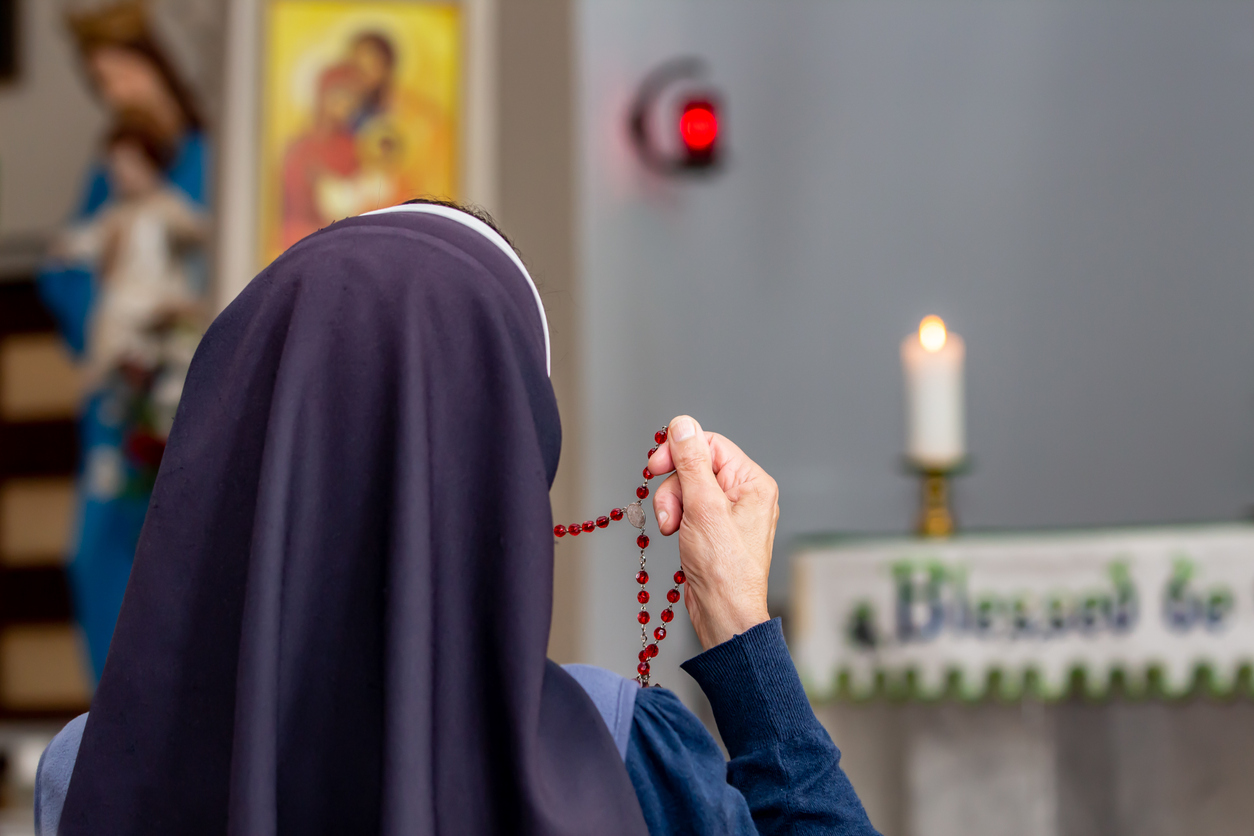 Sister Margaret was at the foot of the stairs when it happened and caught the old woman at the bottom and cradled her, calling out for help. Her Anglican Sisters have since been praying dutifully for her life.

“In the first moment, forgive me, it almost seemed funny,” Sister Margaret says, her prayers having trailed off, her eyes traveling up over the blank spots on the walls between stations of the cross.

“It was like in one of those American comedies,” she goes on, several of the Sisters of Mercy coming closer to hear, while most turn their bodies away, shut their eyes, recite the Lord’s Prayer louder. Margaret has only been at St. Saviour’s a year; she had been living a worldly life before and changed upon having a vision of heaven—or so it has been said. Similar is said of Sister Dora.

“The way her legs went out from under her, the look on her face. The sound she made. If you saw it as a picture and didn’t think of what came after, you’d laugh. When she hit and tumbled it wasn’t funny. Her bones cracked. That’s not a funny sound. It’s just that picture, of that first second she was in the air. It was just like in a comedy film, like how they fall down.”

Those that gathered start to turn away, back to their prayers, shutting themselves off, until only Sister Gertrude is left listening. She crosses herself, articulate pity crossing her face for Sister Dora, Sister Margaret, and all living things. The younger woman realizes what she’s said, clenches her forehead and brings her hands up to her lips, whispering between clasped hands. They all pray for the life of Sister Dora.

The funeral mass is held two days later, on the 16th of August 1940. The Sisters of Mercy at St. Saviour’s Priory pray now for her eternal soul.

Sister Gertrude, now Mother Superior, recalls this exchange years later and allows herself a brief smile, before praying for the souls of Sister Dora and Sister Margaret. It is 1972; she’s careful on the Priory steps these days. Her mind is sharp, but so are the angles of her frail form.

The makers of a film are in her office to ask permission to use St. Saviour’s as a primary location. Mostly exteriors. They’re young and nervous.

“I – we were raised Catholic.”

“But we deeply, deeply respect you. And your order. And your church. Your beautiful church.”

The director, a young man who stammers when he talks, puts his hand over his mouth when the producer speaks, like he’s trying to contain himself. He smells of cologne over cigarettes. The producer is dark haired, gap-toothed, freckled, like so many of the women Mother Superior has seen pass through the Priory. The producer at least makes eye contact when speaking, which she does haltingly. She smells more honestly, just of cigarettes. They say they are making a religious film; they give Mother Superior a plot description.

“I’m sure you heard stories of demons before.”

Mother Superior is 72 years old. She joined the Sisters at the Priory in 1922, but she had heard about the pictures, what it was like to see one in the theater. She listens patiently.

“Do they tell you about them things? Those things? Demons and bad spirits?”

From his accent, she can tell the director is a local. Likely born in London proper. The producer is a Scot. This is their first and only film. It is low budget, and the script was written in three days.

“It’s a terrible world we live in sometimes,” the producer says, like she’s somewhere else.

The film, titled The Beleaguered, will be released in 1975. There is a nun plagued by visions who throws herself down a flight of stairs. A priest who hears the demon’s voice lies down in front of an automobile and lets it run him over. There is a possessed choir. The blood is bright red paint, and the film is overexposed. It will be released in the U.S. in 1976 as Hellish Betrayal.

“Of course, you wouldn’t think that, being a—I mean, having devoted yourself to God.”

Sister Dora liked movies. She came from a family of actors. Some of them were in the moving pictures. She lived a life of love and experience before joining the church. During WWI, by then already at the Priory, she wrote bawdy marches for the troops to sing and had them attributed to someone else. She was the same age when she died as the Mother Superior is now.

“What I mean to say is–I hope we haven’t offended you. This is a movie about faith. It’s about a demon that wants to destroy people’s faith in God. But not everybody lets it.”

“It’s sad some people let it. It’s scary. That’s the real scary part. Not the gore, not that there’s much gore, all that much. We’ll cut away—away from, anything particularly offensive. To you.”

Sister Margaret liked the comedies, especially screwball. She had a sense of humor that got her in trouble, but her God was always in her heart. She passed in 1968, due to acute pleurisy.

“What you can’t see is so much worse than what you can, right?” the producer’s voice trails off.

The Mother Superior brings her hands up in front of her lips and thinks again about Sister Dora.

The director wishes he could be filming her right now and put her in the movie. She sits behind her desk so perfectly still, like a statue. He finds himself holding his breath, trying to be still, calm. He wonders briefly if praying works. If the Mother Superior would pray for him. When the Priory bell breaks the stillness of the moment, the filmmakers both flinch.

Ambrose Tardive is a student in the MFA program at Randolph College. He lives in Phillipsburg, New Jersey. “Sister Dora” is part of an unfinished novella.