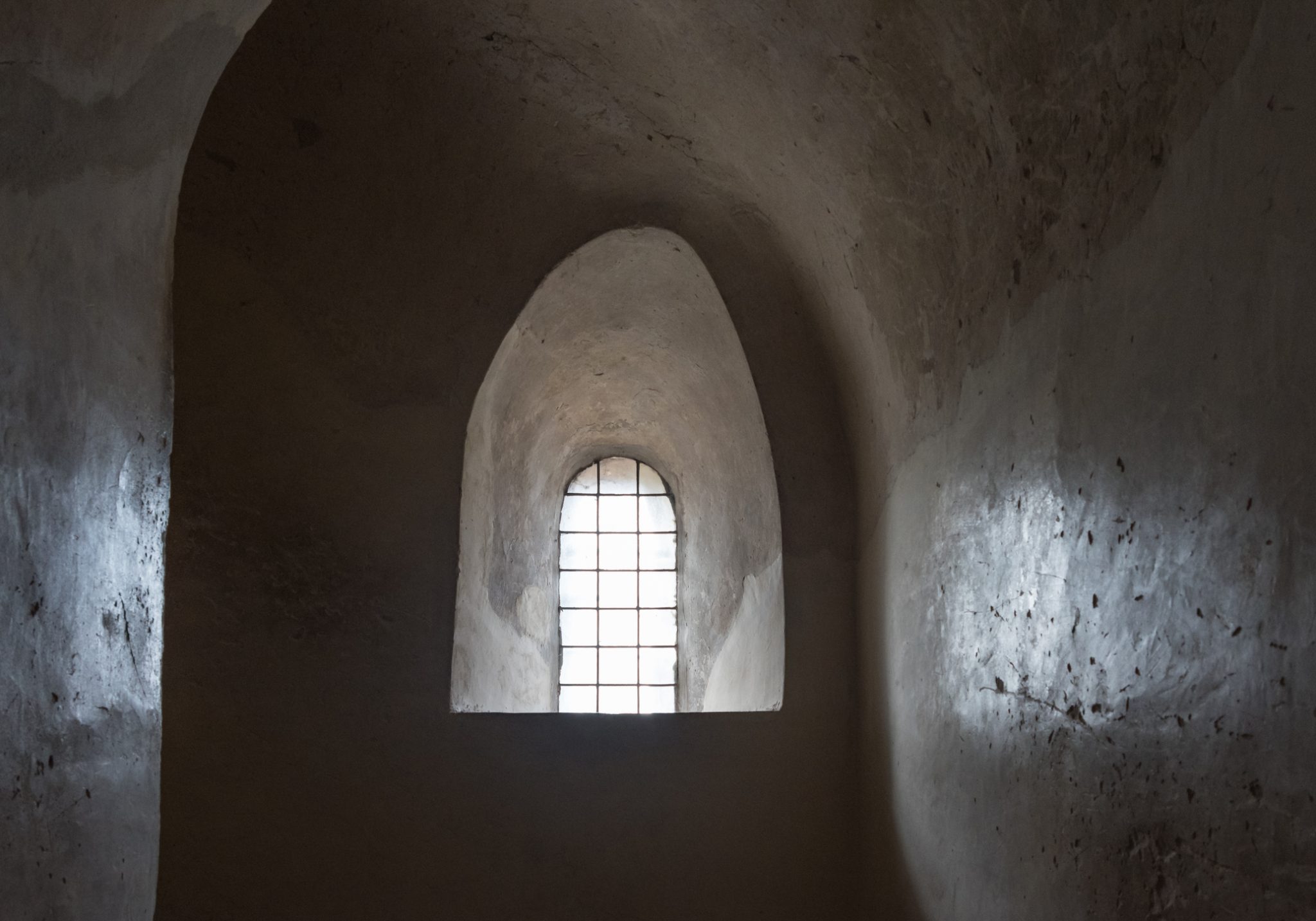 In the basement of the rectory of the Sisters of Mercy, the newest arrival to the unmarked shelter moved her hand to the bandage over her right eye. With her left eye, she took in the bare walls of the neat room, its dim shade of paint not quite white. Eggshell, her Grandmother would have called this color. She heard singing upstairs, a soft alleluia above multiple pairs of feet moving back and forth, and kitchen sounds: clanging of pots, the hum of a food processor. She listened to the alleluias and watched the roaches on the ceiling.

Your daughter is helping, said a soft-moving woman in blue, entering the room with a glass of water. You will need this, she said, and placed it on the bed.

Hot cross buns. The soft woman in blue put the cool back of her hand against the forehead of the woman in the bed.

It’s Easter, she announces, Today we celebrate, and today you are here. Today, she said, is a day of beginning.

There were more alleluias and the smell of baking and through the roaches in the ceiling she remembered a phrase from a book she had left behind when they fled. Here is the place where you are. Treat it like a powerful stranger.

Later, the sense of her daughter’s approach. She didn’t need her eye to tell her, but looked anyway.

Mama, said the girl, and placed beside the water a plate. Look, I helped!

Then the soft still-baby smell of her hair, washed with an unfamiliar shampoo. What had she been eating? Had someone reminded her to drink water or shown her where the light switches were? How had she made it to the bathroom in the middle of the night, and by what means had she attempted to mask her fear of the dark? Here, the mother whispered into the scalp of her daughter’s washed hair. Here.

They lay together in the bed, the nuns above moving and occasionally singing, and in the haze of the headache that came and went: had there been stitches? There must have been, she didn’t remember, leaning in. If there had been a word for this waiting, this leaning-in posture of Listen and Look; of Hold, Breathe, Wait for a Sign of How to be Here, it would be a word to keep. To say it would be to tempt its disappearance.

In the beginning of the time she could remember, she had waited in the stillness of her grandmother’s living room, in the silence that followed her mother’s long illness. There were questions beneath the silence, but no answers. What a shame, people whispered. But her grandmother in the kitchen never whispered; she hummed beneath her breath and cooked bacon on a skillet and made heart-shaped waffles which she served with soft butter on a blue and white patterned plate, as if for a special occasion, even if it was only a Saturday morning in mid-March. Her living room was blue as whales, and in it stood the noble furniture of a former time, when wood was solid and stitches were sewn by hands who knew. There was a painting of a canoe on stormy seas above the set of drawers she called the buffet table and below this painting a gilded Bible on a stand, a red ribbon down its center to hold the page. Her grandmother read, In the beginning was the Word, and knew it. This was what you listened for, her granddaughter would think later, waiting beneath the roaches and beneath the crucifix and beneath the sisters cooking and beside her daughter’s newly washed hair; you listened for the sound of someone knowing how to be here, and you looked for a way to follow.

How often, when she had been a girl, curled against her mother in the bedroom of the facility where she had been treated, had she closed her eyes, feeling the barometric shifts of an oncoming storm and whispered from a clenched hush behind her stomach, Wait.

There had been a moment, the mother remembered, from the bed beneath the crucifix and the roaches in the ceiling and the singing of the Sisters of Mercy in the kitchen, when her daughter had known the feel of her tiny hands swallowed safely inside the large grip of her father’s, who spun her, face to the sky, squealing with delight. Centrifugal force, he explained when she asked: the thing that pulls molecules apart. Understood, even then: here is the violence that pulls you away, if it moves fast enough, from the place where you are standing, rooted in certain forces you tend to come to take for granted, like gravity.

Mama, whispered her daughter in the bed, forearms clutching her mother’s hold, How long are we gonna be here?

Just a little while.

And in the silence that followed, they breathed in one another’s smells in this new place.

The voice that had come earlier, from the soft-footed nun bringing water to be bedside now called lightly in a chirping tone, Are you there? We are making breakfast.

The mother held her daughter, leaning in to listen. She heard the sound of her name in the voice of someone she had not known before this day, and she felt the beginning of a response stretching outward from the back of her throat, barely a whisper, calling Here.

Stacey Johnson writes and teaches in San Diego County, where she is a current MFA candidate at San Diego State University.  Her work has appeared in The Adirondack Review, A Year In Ink, r.kv.r.y quarterly literary journal, and various other publications.  She lives with her daughter, Grace, who inspires everything.