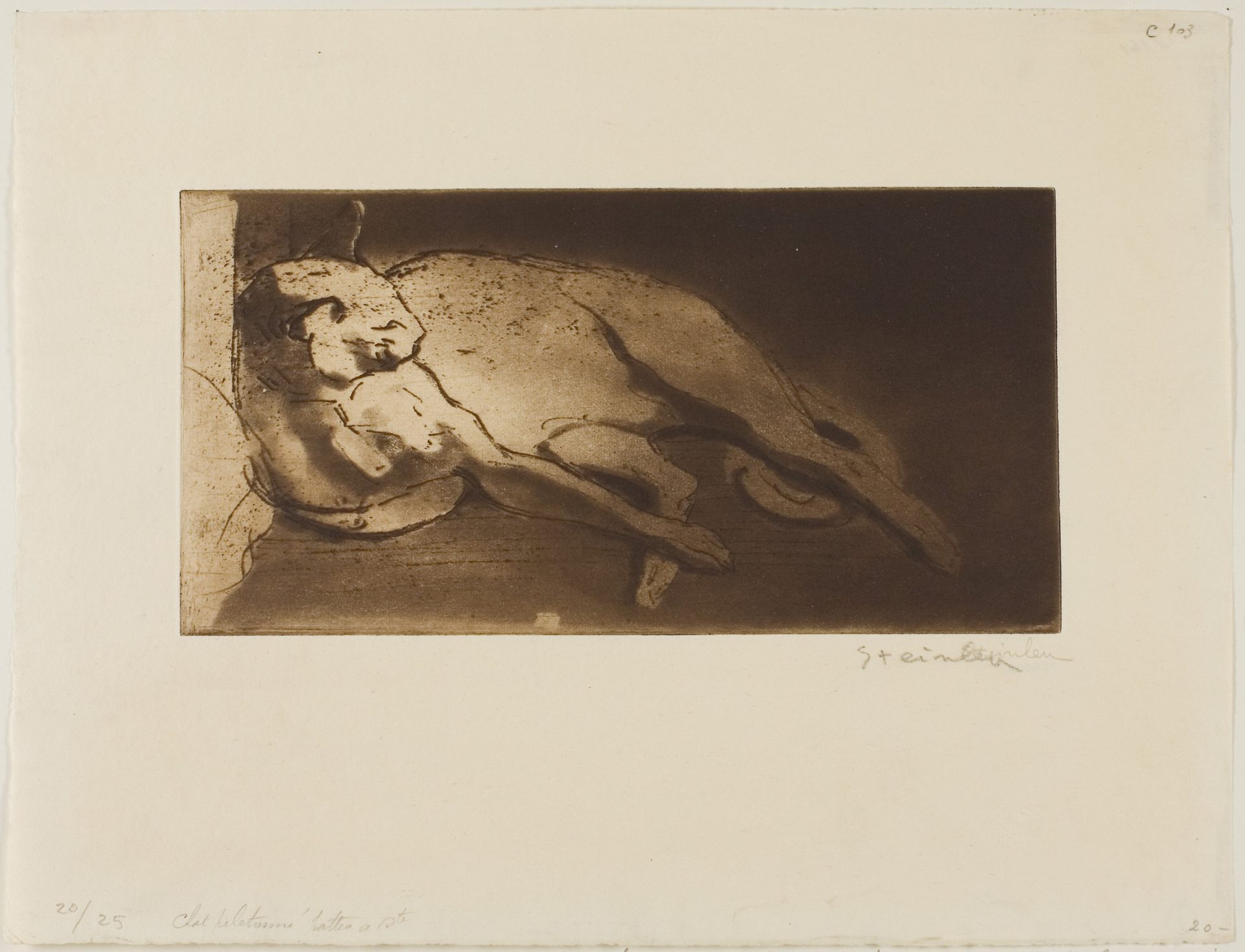 
“My cat grew fingers the week after my mother died.

I noticed it in the middle of eating leftovers of leftovers in the kitchen. The tiles were sun dappled, and I heard the cat approaching, her footfalls heavier than before.

Her fingers weren’t human. Her paws had just grown longer and thinner. It was upsetting to look at and it gave her an aura of being smarter than she was.

She meowed and rubbed her face against my shaking legs.

My cat became bigger over the course of a few months. The process was so slow it was difficult to notice. I saw her sleeping in a bed that before had cradled her and now practically flattened under her weight.

I became frantic when she reached the size of a large dog. Her cat-body and dog-size made her slender and fast. I made my way around the house on tables and countertops, avoiding the floor where she roamed, following. Always following.

A month after that I began to hear her voice.

Her meowing became deeper, more throaty, more purposeful. She would rush to block my exit or entrance and look me in the eyes.

By this point she’d begun chasing me down and I had sectioned myself off from the rest of the house. I was downstairs and she was upstairs, with my mother’s wardrobe between us.

One night as I cautiously approached to pour food between the cracks for her, I heard her. Her voice was faint and echoey. A mimicry, like parrots. Her words were clear though; I’d never been so sure of anything in my life.

I dropped the food, screaming as I nearly tripped down the carpeted stairs in my haste to getawaygetawaygetaway.

“I see you,” trailed after me, the wardrobe shaking as she scratched at it. “I see you. I see you.”

Around a week after that my cat grew the strength to knock down the wardrobe. It crashed down to the bottom of the stairs and there she stood at the top. Shakily bipedal. I watched in awe, slack-jawed. My heart beat so fast I thought I would die. I thought the shock would kill me.

I wondered if, with no way out, it would eat me.

I wondered if it would open the door and leave.

“I see you,” she said, crawling down the stairs. Her new body made her movements awkward. She was a half-formed, vulnerable creature, and she looked at me with urgency, spoke with urgency. “I see you.”

I prepared her bowl, and she ate it greedily.

A month after that she grew a face; her features were fur-covered but skin poked out in places. It was unpleasant to look at and her expression changed too rapidly to gain any insight into her mood. It was more like a twitch than a conscious choice however, so I couldn’t blame her.

I tried to teach her how to speak but she would only groan and cough and hiss and repeat her I see you’s until I became too unnerved to continue and would race away to the bathroom.

One day she began to turn the knob. I sobbed and cried and screamed at her to go away!

She learned a new word that day. “No.”

A month after that she grew breasts. Real breasts, four in total. She continued to lay on her stomach, the buds barely big enough to inconvenience her.

A month after that she grew teeth. Her old ones fell out one by one each day and then regrew dull and gnashing.

A month after that was hair.

A year after my mother had died, my cat had vanished and in her place sat a young woman, head tilted towards the light.

“I see you,” she said, voice stronger but still raspy. Still faraway.

That day I wrapped her in a coat that reached her knees and drove her to the cemetery. It was a warm, cool day. A day where nothing pressed too heavily on you. She was barefoot but didn’t flinch as she treaded lightly over rocks and twigs. I led her to my mother’s grave and read out the name on the tombstone.

“I see you,” my mother said, tracing her finger over the engraving, knees buried deep in the flowers left behind.

I cried then. So hard and so deeply it felt as if I would never cry again.

Lassiter Waith is a student at SUNY Purchase and enjoys exploring the lives and worlds of people he wouldn’t get a chance to in everyday life. His greatest joy while writing is discovering ways to make situations and characters that at first glance seem strange to be relatable.

Image: Théophile-Alexandre Steinlen. Reclining Cat Stretched Out from Left to Right, 1903. The Art Institute of Chicago

“My Cat” was selected as a finalist for the 2020 Best of the Net award.

The Roadrunner Review nominated “My Cat” for The 2020 Best Small Fictions with Sonder Press.