Meet the Judges of the 2021 Roadrunner Prizes 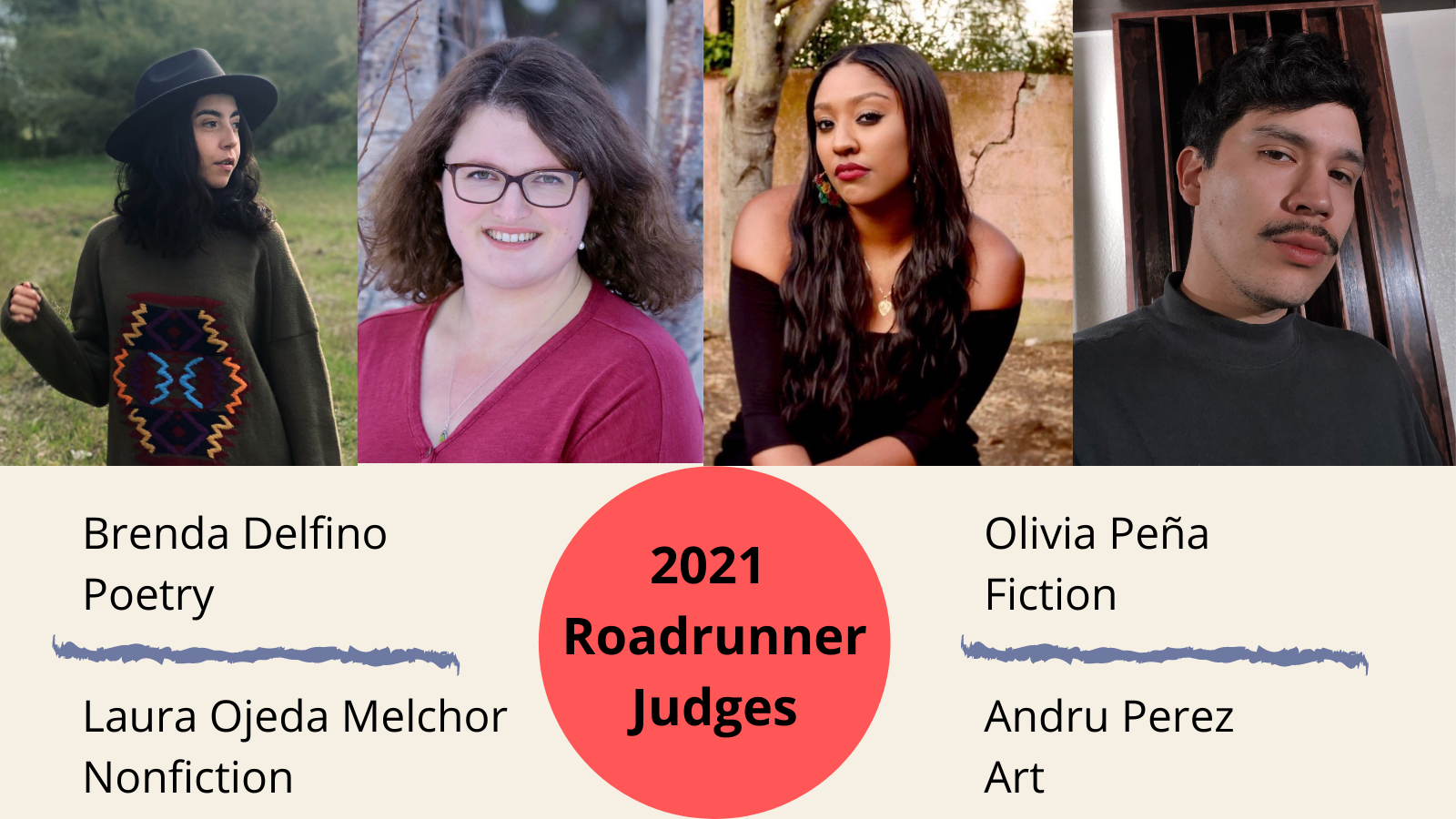 We are thrilled to welcome Brenda Delfino, Laura Ojeda Melchor, Olivia Peña, and Andru Perez as judges for our 2021 Roadrunner Prizes. All submissions for ISSUE 7 will be considered for our Roadrunner Prizes. The winner in each genre will be awarded $100 and publication in ISSUE 7. Submissions are free.

Poetry Judge: Brenda Delfino (she/her/hers) is a poeta, imigrante, based in Riverside, CA. She is a multimodal visual and literary artist and educator. She is passionate about community coalition and creativity for self-determination and healing. Brenda received an MFA in Creative Writing and Writing for the Performing Arts from University of California, Riverside (UCR). She is a VONA and Along the Chaparral Fellow. Her works have appeared in World Literature Today, Los Angeles Review of Books, Spectrum Magazine, and elsewhere. She has organized, hosted, and read in UCR Writer’s Resist 2018 and 2019; has read at UCR Writer’s Week in 2019; and was featured by Inlandia in 2020 for National Poetry Month in the Inland Empire. She is currently working on a chapbook titled Dictaduras de las Aguas and an untitled full-length manuscript of poems. Brenda is a literary liason at Black Light Arts Collective and was a poetry editor in the zine The Black Imaginarium. She is Poet B in the radio segment Baby Poet at Radio Tirado.

Creative Nonfiction Judge: Laura Ojeda Melchor is a freelance writer and novelist who lives in Alaska with her young son and partner. She spends her days playing with her 4-year-old, from whom she wishes she could borrow a steady IV-drip of energy. When he goes to sleep, she writes and reads as much as she can. In 2017, she graduated from Vermont College of Fine Arts with her MFA in Writing. She enjoys writing nonfiction essays about parenting, and in her tiny slivers of spare time she works on her two works-in-progress: one mystery novel for middle-graders and one young adult novel set at a boarding school. Her work has been featured on Parents.com, Mom.com, and Re:Fiction Magazine.

Fiction Judge: Olivia Peña is a Black-Salvadoran writer and storyteller from San Francisco. She earned her MFA from the University of San Francisco. Her writing has been supported by the Tin House Summer Workshop and her work has appeared in PANK Magazine and The Acentos Review.

Art Judge: Andru Perez graduated with Honors and a BFA in Graphic Design from the Art + Design Department in 2019. Designed The Roadrunner Review website. Worked for an art collective in Los Angeles named SOVO// Projects that publishes a quarterly art book composed of all analogue photography, and hosts several art exhibitions showcasing the work of independent local artists. Currently works as a graphic designer and production artist for Impact Theory LLC, a company that produces several YouTube interview series and podcasts about mindset and business as well as a comics department that creates original and empowering content for all audiences. Has a love for all things design, fashion and film.