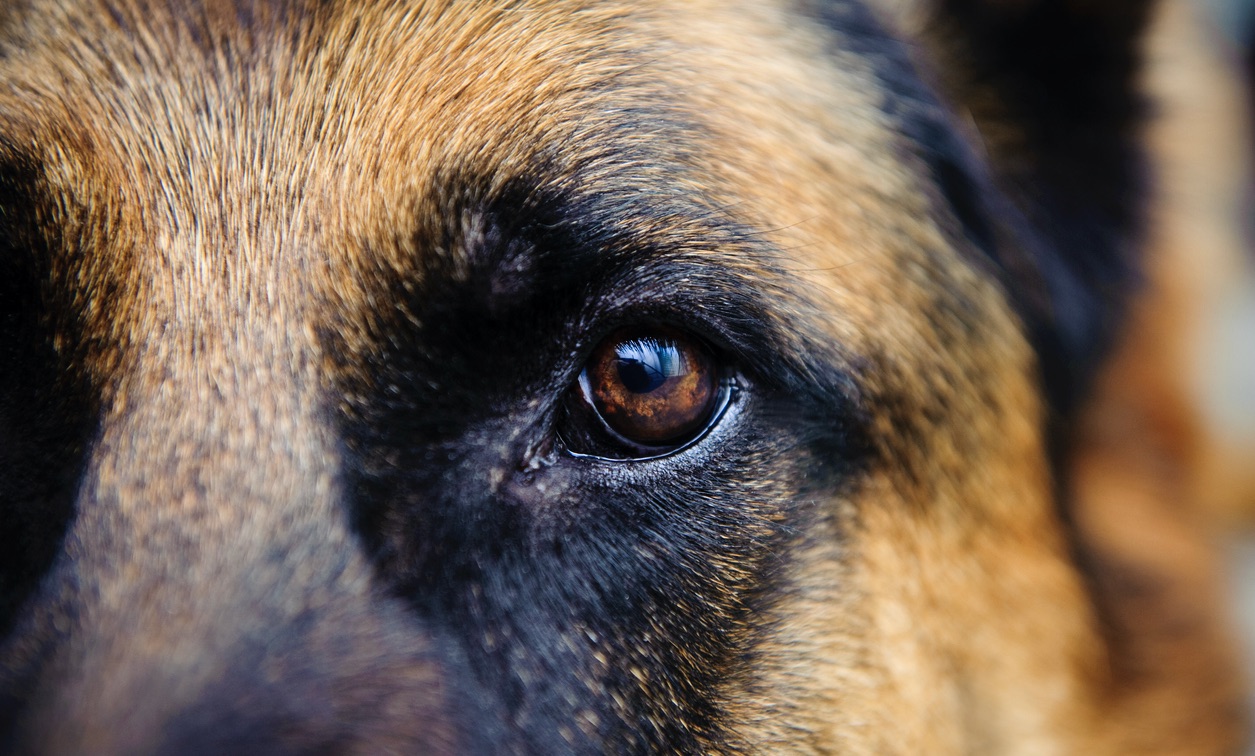 The neighbor’s dog watches me through my bedroom window. It lives mostly in the backyard next door, a shepherd with a loud bark that increases exponentially in volume if I so much as glance outside while getting dressed. Eventually, I will buy curtains.

When I walk on the sidewalk, the dog comes to the fence, snarling, bringing its teeth and tongue to the wire, threatening my limbs. I avoid eye contact, pretending to be absorbed by my earbuds. I wait till I’m all the way down the block to press play.

When my friend visits, the dog is silent, subdued.

“You must have a gift,” I say, explaining to her that the dog is usually a menace.

I’ve worn the same shirt for two days in a row. The washer-dryer broke a week ago and now the hamper is full, without room for even a single sock. I wake up early and bring my coffee into the bathroom, spending my morning washing the clothes in the tub. The water becomes a violet indigo color, like wine in a cartoon. After wringing out some of the wetness, I pile the soaked garments back into the hamper and take them outside. If I owned clothespins, I would line the laundry out to dry. Instead, I drape the pants and shirts and towels over the railing of the back deck, working haphazardly under the pressure of the barking dog, my manager at this moment, complaining about my work before it’s even complete.

After a week of dodging my calls, the landlord sends a repairman to inspect the washer-dryer. “Oh, I’ll need to order some new parts,” the man says after spending barely a minute with the machines. He tells me he will be back by Thursday, but Thursday comes and goes, and then the weekend passes and I’m still wearing wrinkled clothes that smell like mowed grass. I stop calling the repairman and dial the front office of the company he works for.  “His son was murdered. It was all over the news,” the secretary tells me. She doesn’t offer up an alternative repair person. Local boy gored by rhinoceros. He was on a field trip to the zoo and a classmate bet him to jump into the enclosure. There’s at least five different videos of the incident floating around online. The tip of the rhino’s horn is cherry red. I sign an online petition calling for the rhinoceros to be euthanized, and another petition calling for the rhinoceros to be released back into the wild. Then I order a box of clothespins.

“How charming,” the grandmother who lives next door calls out to me as I pin up a bed sheet. She’s never spoken to me before. I turn and smile, waving my hand. The dog is by her side, watching, face scrunched up as if trying to send me a growl telepathically.

“This is Roberta. Roberta, say hello.”

The telepathy disconnects and Roberta runs to the fence, fangs exposed.

“Who’s the baby daddy?” I ask, realizing quickly that my sense of humor is not shared.

The puppies are born the day the washer-dryer is finally replaced. The new unit is an old unit the landlord bought refurbished. I’m glad to not have to use the tub anymore, but I’ve decided to wait until winter to use the dryer.

My friend is late. We’re going to a concert at a bar tonight, a band neither of us knows. When she finally arrives, her arms are full of what looks like a measly, unwrapped, uncooked chicken. “They wouldn’t take no for an answer,” my friend says. The neighbors were on their front porch with the puppies, and when my friend walked past, they persuaded her to take one of the babies. The pup is gray with a bulbous head and long clawed paws. “I can leave him here tonight, right?” I nod. We lock the pup in the bathroom when we leave for the concert. My friend goes home with a stranger and doesn’t return the next day, or the next day. By the weekend, Alien has become my roommate. Soon, he decides we should share a bed.

The blackout blinds make me sleep deeper than ever before. My dreams feel like extensions of my days.  Often, Alien will make a cameo. Last night, he spoke. He said he was killed in his last life. He wanted vengeance. He told me his father would need to bring him the horn in order to avenge him.

Alien didn’t wake me up today. I found him by the washer-dryer, chewing on a clothespin, the fangs in his mouth looking sharper than they did yesterday.

Parth Shah is an MFA student at the University of Wyoming. Prior to graduate school, he produced podcasts for NPR.