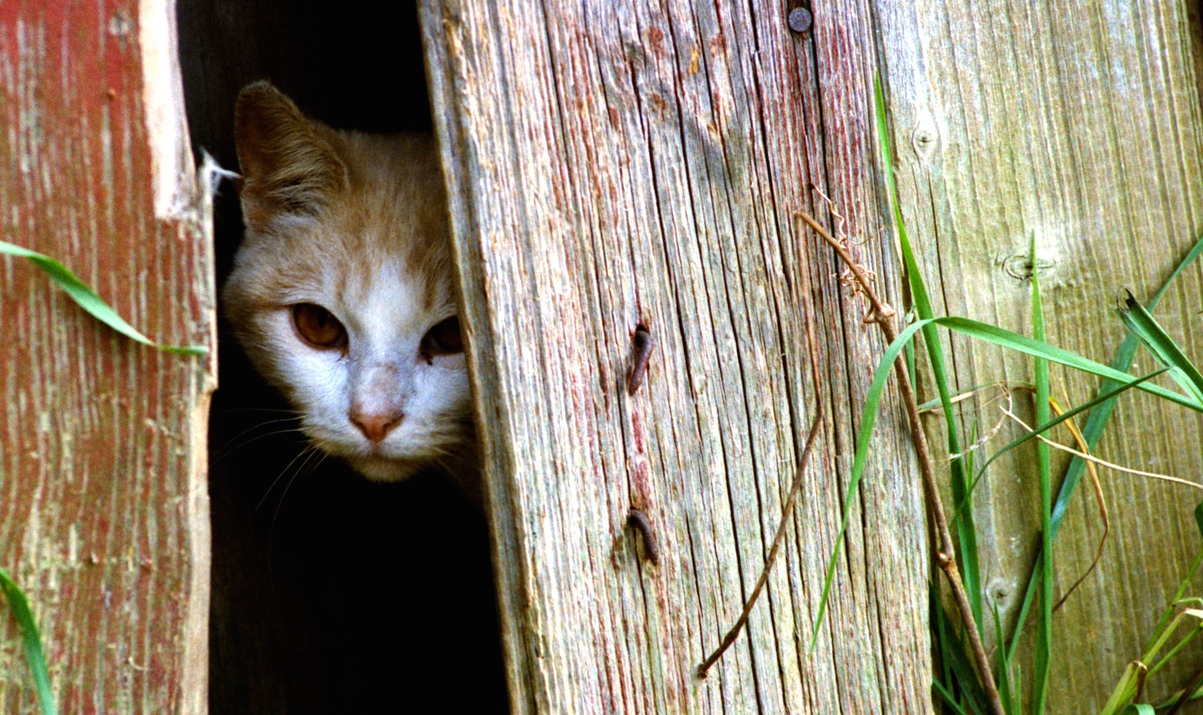 In the barn, amidst the chickens and gravel and straw, my grandfather bends over to scrape wet cat food into a dish. The bone-thin cat approaches from behind an overturned canoe, back arched, and curls her spine through his arthritic fingers. As he straightens, she laps up the food. He reaches into the front pouch of his pinstripe overalls and pulls out a tin of Grizzly, spitting a streamline of tobacco before packing in another lipful.

“Good girl, Kiki,” he says. He twirls the end of his mustache, religiously shaped every morning with Clubman Mustache Wax. The cancer left craters on his knuckles and his nose, the kind of scars that make you wince and look away.

Ask him about being a second-class diver in the Navy, or about repairing the rudders of combat ships, against the current, beneath the waves of the North Atlantic. Ask him how cold the water of the Bering Strait is, and he’ll describe that Alaskan wind chill. Ask him about the Cuban Missile Crisis, and he’ll tell you. He was there, part of the blockade surrounding the island. Maybe he watched the sky in terror, or maybe he sat in numb silence. Maybe he felt the tension of the taut rope as Kennedy pulled one way and Khrushchev the other.

Ask my grandmother about how he watches Marshall Dillon on “Gunsmoke” every day at noon as he eats a bologna sandwich off a tray before dozing off reading 100 Things Every Steeler Fan Should Know, a crocheted blanket over his knees. Ask her about how he waters the pumpkins and butternut squash and snap-peas in the garden, sprinkles Miracle Gro, protects them from the rabbits with cages, just because she likes fresh vegetables.

Ask my dad about how my grandfather taught him and his two brothers to kill a chicken—cradle it like a football, ring the neck, twist until it’s tight, pop, let it run until it drops. How he made the two oldest, as a punishment for antagonizing the youngest, pluck 500 dandelions up by the root from the front yard, even after dusk swallowed up the sun and the porch lights were all they could see by. How he drowned abandoned barn kittens in a bucket of water.

Ask me, and I’ll tell you about the time when I was seven years old and my grandmother brought me corn on the cob with a fat slab of margarine on top, melting between the kernels. When I complained that I didn’t want that much margarine, he said sharply, “Well, then don’t eat it.”

I’ll tell you about the time I was 18 and leaving for college. He placed an amethyst key chain, my birthstone, in my palm and a heavier geode like it in my mom’s. “Even when you’re apart,” he said, “these will keep you together.”

The cat cleans the last morsels from the dish. Her olive eyes pin him, asking for more. A mewl floats from underneath the canoe, where three balls of fur nestle close together. My grandfather sighs, bends, pulls the tab on another can of food. His fingers rustle the fur behind her ears.

Katie Milligan is attending Cedarville University with a major in English and minors in Creative Writing and Editing and Publishing. She has previously been published in bioStories and hope to share more of my work in the future. When she’s not writing, she enjoys hiking and painting.

The Roadrunner Review nominated “Barn Cat” for a 2019 Best of the Net Award and a 2020 Pushcart Prize.